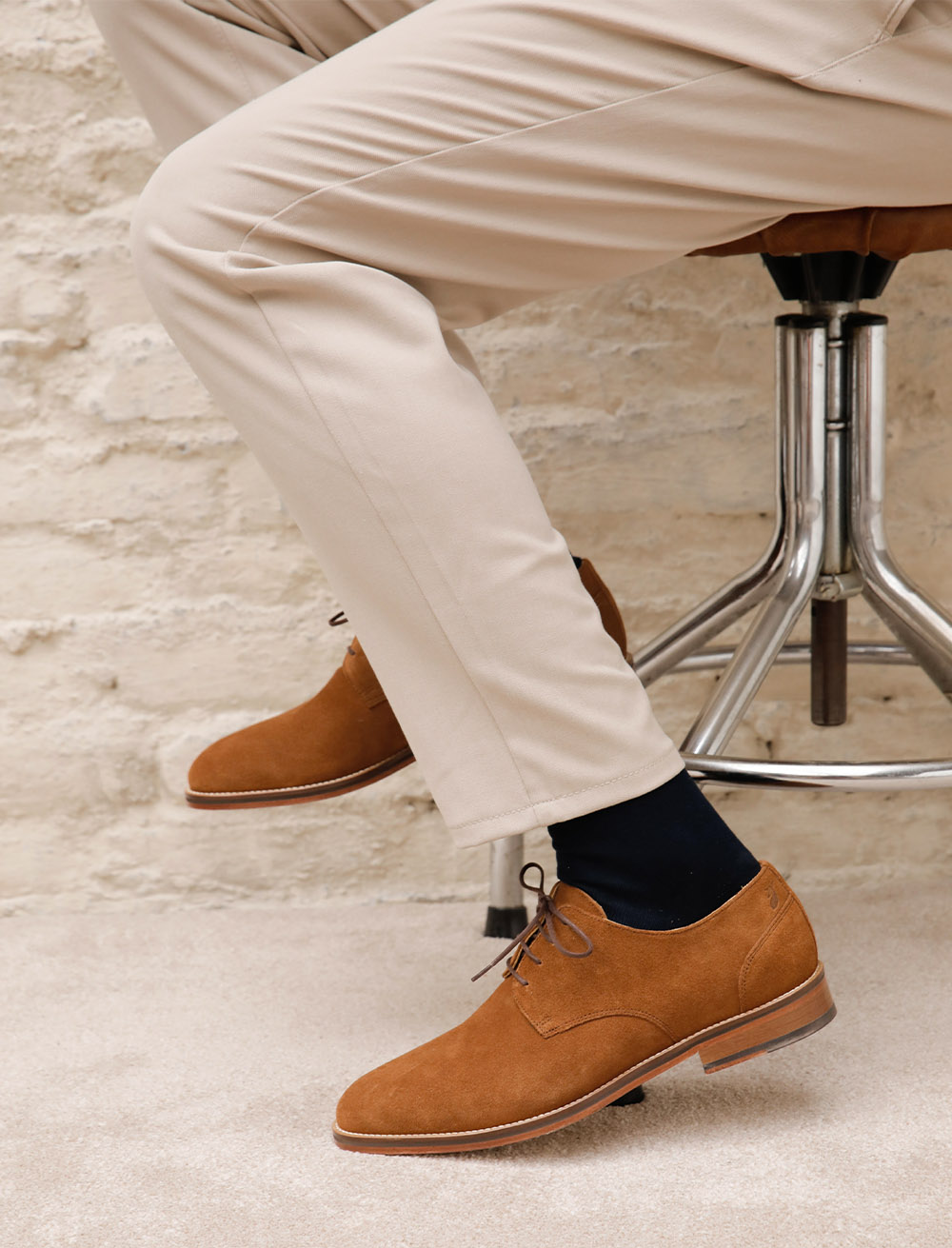 Pay in 3x with

This pair comes with temporary sole protecting pads, so you can enjoy them as soon as you receive them!

Free delivery for purchases of 150€ and over and free returns for Metropolitan France, Belgium and Luxembourg.
Make a return up to 30 days after receiving your package.
For more information, read Delivery & Return section.

It's a little routine to get into.

Here's what you need to do for this suede model: you need to waterproof it with a waterproofing spray (we also sell them in our shoe repair section). This protects from stains and water and will optimize the longevity and good holding of the leather over time. Then a shot of Sublim Suede to revive the colour of your shoes, with a crepe brush if possible.

For your leather soles: we give you a temporary sole protecting pads, so that you don't slip the first few times. But we recommend that you take them to your shoemaker when you receive your pair so that you can have real skates put on them. Your shoes will only last longer.

Well the idea was not to advertise our shoemaker but to give you some tips to keep this little jewel as long as possible. 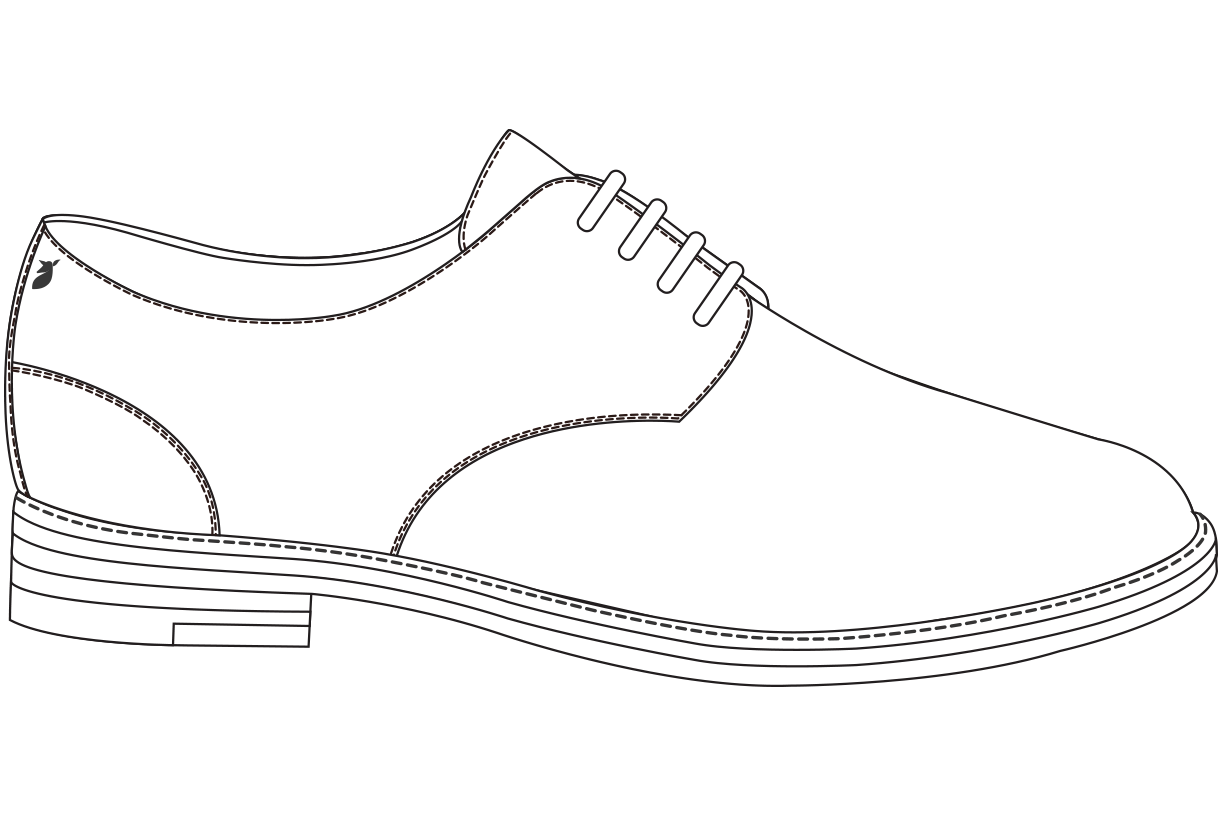 All Pied de Biche shoes are fully lined with cowhide leather! These leathers are soft and durable.
This small luxury is a guarantee of softness and longevity, and therefore of comfort.

The top insole is also made of cowhide leather. It is doubled with a comfort insole that is 2mm thick as well as an additional 2mm thick cushion in the heel area.

The leathers used for the shoe upper are smooth cowhide leathers or suede leather.
Our artisans are extremely careful and cautious during the cutting phase, in order to select the most beautiful parts of the skin to ensure you enjoy the most beautiful, soft  and comfortable shoes.

The leather sole is attached to the upper by a Blake stitch. This technique guarantees both flexibility and finesse. Blake stitching also guarantees great longevity, since your cobbler is able to re-sole your Derbies.

Leather is also a naturally breathable material ,this is the reason why we chose it for our soles!

The 2.5 centimeter heel is made out of leather. The heel block top piece is beveled with at the back a natural rubber pad and at the front a leather layer.

The little doe (Biche) is beautifully embossed, hot stamped in the leather, at the back of this model. Discreet, the doe will accompany you everywhere!

Derbies and Oxford, our essentials for men's wardrobe

Our permanent collection is growing
This season, we have worked hard to revisit two iconic models of men's shoes: the Derbies, and for the first time at Pied de Biche the Oxfords. A must in the male wardrobe, we couldn't help but do it! In smooth or suede leather, black or tan color, with laces or buckles, you now have a wide choice to dress each of your costumes. Classic timeless, these two iconic models will now be part of our perms, which means that you can find them every season.

What is the difference?

Oxford, Derbies, Monk... But what is the difference?
Very close to each other, we often tended to confuse the Richelieu and the Derby. However, an essential characteristic distinguishes these two models: their lacing system. To never go wrong again, here is a small lexicon of low shoes. The Richelieu, otherwise known as Oxford in England, or even Balmoral in Scotland, is characterized by a closed lacing, which gives a V-shaped opening to the shoe. The Derby, on the other hand, has an open lacing, which makes it easier to put on and will be better suited to strong kicks. Finally, the Doubles-Boucles, also nicknamed Monk, is a form of Derby without laces.

The origins
Today great classics, the Richelieux and Oxford were first considered as truly revolutionary models for the time and were shaped against a current flagship model: the boot. In opposition to these dress codes, students at the University of Oxford began to wear in the 19th century a half-boot with laces, considered less restrictive, and above all more comfortable, which quickly became fashionable. The Oxford was born! More flexible than the Richelieu, the Derby would then have derived from this model by widening, to allow the Earl of Derby (hence its name!), Endowed with atypical feet, to be able to wear shoes.

Suit shoes...
Slightly almond shaped, the tip of our Derbies and Oxfords is neither too round nor too pointed in order to perfectly fit the shape of your feet. Our Oxfords and our Double Buckles are therefore ideal to wear with your costumes for a dressy and ultra chic look that will seduce your boss as well as your crush. In black, our Oxfords have even become one of the favorite models of many future spouses on the occasion of their wedding.

...To casual look
In suede or tan color, our Derbies and Oxfords also offer a more relaxed look. You can wear them with jeans or chinos and a small shirt for a casual chic style. Perfect for an aperitif with friends as for a garden party!