Add to your wishlist
190,00 €
New Pied de Biche shoes to pamper your feet this fall! Juliette Fourrées: comfort and warmth to face Fall/Winter with confidence.
My size

Add to cart
Book in store

This item is standard-sized. Choose your usual size!
Between two sizes? Choose the larger one!

Returns and exchanges are free.

Free delivery for purchases of 90€ and over and free returns for Metropolitan France, Belgium and Luxembourg.
30 days window to return your order.
For more information, read Delivery & Return section.

It's a little routine to get into.

Here's what you need to do for this suede model: you need to waterproof it with a waterproofing spray (we also sell them in our shoe repair section). This protects from stains and water and will optimize the longevity and good holding of the leather over time. Then a shot of Sublim Suede to revive the colour of your shoes, with a crepe brush if possible.

For your leather soles: we give you temporary sole protective pads, so that you don't slip the first few times. But we recommend that you take them to your shoemaker when you receive your pair so that you can have real skates put on them. Your shoes will only last longer.

Well the idea was not to advertise our shoemaker but to give you some tips to keep this little jewel as long as possible. 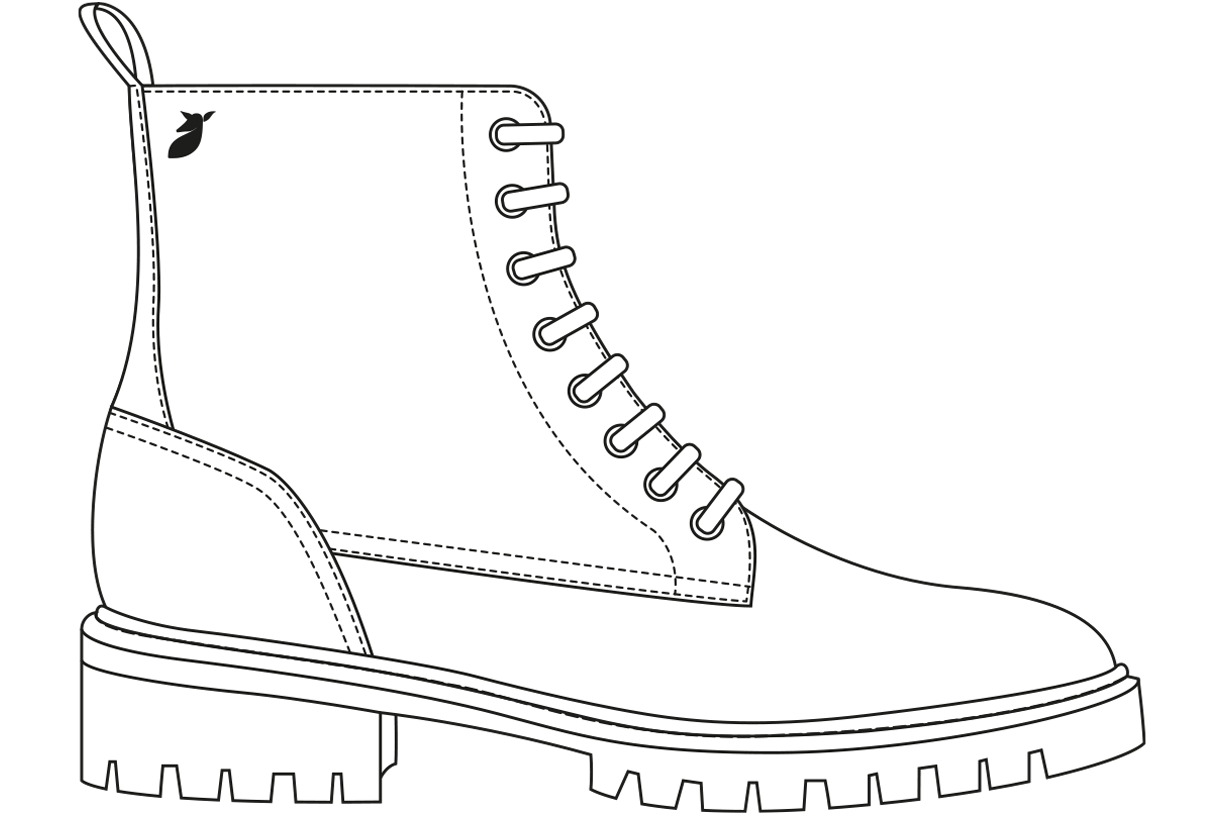 The leathers used for the upper of the Juliette are suede leather.
Our craftsmen bring particular care and vigilance during the cutting process, in order to select the most beautiful parts of the skin to offer you beautiful, supple and comfortable shoes.

Our Juliette combat boots are fully lined with 100% lambswool. This makes them soft and comfortable. Kind of like putting your feet on a pillow. And underneath the cowhide "footbed" we put a comfort pad. ☁️

The laces of the Combat boots Juliette model are in black waxed cotton. With 8 lacing points and discreet metal eyelets, it is practical but elegant.

A heel up to the task

The size of the heel measures 4 cm and the thickness of the rubber sole can be seen. Enough to have a casual pair this winter.

The little Biche is beautifully embossed, hot stamped in the leather, at the back of this model. This discreet Biche will come with you everywhere! ♡

The sole is made in commando rubber. Therefore, the shoes is more sturdy and will suit you for any circumstance. It's a reliable alternative for this Winter!

Handcrafted for your feet

Our shoes are the keepers of a precious craftsmanship that we found right within the European capital of the shoe in Portugal: Porto. It is there, that our artisans invest their whole selves to insure the high quality of the shoes throughout the year.
At Pied de Biche, we make a point of highlighting the hard work provided by those incredibly talented hands, without which we would be nothing, or at least, not much.

More about it
Winter edition

Our Women's Combat Boots have a very special story: this is the first time that one of our creations is perfectly identical to a male model. But above all, it is a shoe that was born from your desires and wishes.

When our Men's combat boots were released, many of you asked us for their declination. Here it is!

Originally, these laced boots allowed soldiers to be insulated from mud, cold, and moisture.

They have now deserted the conflict zones to invade the asphalt, and bring an original and androgynous touch to your looks! This season, they will become your best ally against the cold because Gabrielle is lined.

Designed in Paris and made in Porto, our Women's combat boots have a very assertive style. Always in search of the highest possible creation, we have carefully selected our raw materials and craftsmen.

So, we have created a collection of boots for women.

Manufacture of our Filled Combat boots

When designing theWomen's Combat Boots, Pied de Biche wanted to retain all the technical features of these laced boots.

Their genuine leather sole is accompanied by a gum midsole, a true thermal insulator. Plus, their full lining of 100% lambswool will keep your feet warm all winter.

Robust, they're sewn in Blake and finished with a studded heel. Fully lined in cowhide leather, our Women's lace-up ankle boots are unrivalled in comfort. Their lace-up upper slims the ankle with elegance.

How to wear your Filled Juliette Combat boots

Reflecting the Pied de Biche DNA, our lace-up ankle boots sport an offbeat look in deep, subtle hues. Suede adds character to the hazelnut colour that enhances the look of the shoe.

Worn with jeans, the Juliette Noisette Combat boots are meant to be adventurous. Their suede calf leather will perfectly match all your looks, and when stuffed, they will keep you warm all winter long!

In metropolitan France, Belgium and Luxembourg.

All your transactions are secured.